FOG - Just off the Road 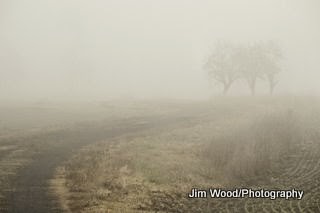 When Carl Sandberg wrote “the fog moves on cat feet,” he was so right!  In our new home here in Sequim, we sometimes awaken to a covering of the softest, dampest fog I’ve ever experienced.  To our surprise, we had no idea it was there. 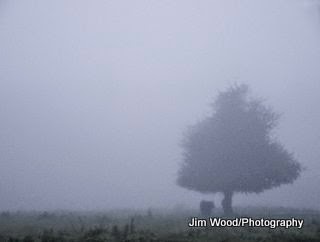 Fog is clever… it steals its way in the night, never giving any indication of its destination.  It covers everything totally, dampening the deck furniture, dripping from the bird feeders (what happens to the birds in the fog?), wetting the cows, setting off fog horns along the coast.
Fog is selective… it settles in at different levels:  sometimes it covers everything, other times it hangs at knee level, often it simply skirts the tops of the tallest trees.  Fog must have a memory, because there are times when it dips into a favorite valley, stays there all day, only to steal
away in the night. 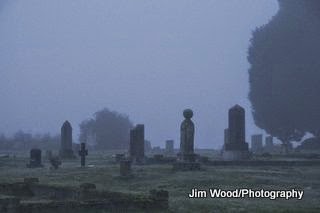 Fog is heavy… at times it brings a pall to everything and everyone in its path.  It is witness to an accident or some other event which calls for sadness and reflection.
Fog is sneaky… it floats along in trailing wisps, much like a kite, dipping in and out of sight behind hills, trees and houses.  Where does it go when it disappears? 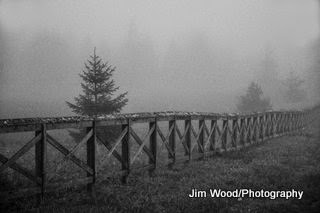 Fog is beautiful… just don’t tell it, or it might want to stay around too long.  It can frame the dreariest scene into an Ansel Adams panorama.  It has a way of softening things, settling things.  It can cause the busiest person to slow down and take a deep breath.
Fog, in short, is a never-ending, always-changing assortment of moods and melancholy.  It lives, on occasion, on my deck in Sequim.  For that I’m grateful.
Posted by JoJo Wood at 8:46 PM