QUITO - Just off the Road 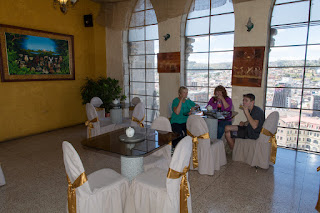 See that group of tea-drinking people?  Can you believe that we're having tea inside the Basillica of the National Vow in Quito, Ecuador?  How did that happen, you ask?  It all came about as the result of our grandson's early love of tortoises.  Since he was a little guy, Evan had a fascination with turtles and, always eager to please, we began showing him pictures of the Galapagos tortoise and somewhere in there, we promised him a visit to see them for real.  He's 13 now, and last year he sat me down and said, "JoJo, you know I'm not getting any younger."
Now what's a grandma to do but sit down with Grandpa (otherwise known as "G") and lay out the options which were actually very few  We began researching Galapagos trips and came across a family adventure organized by REI Travel and the rest, as they say, is now history. 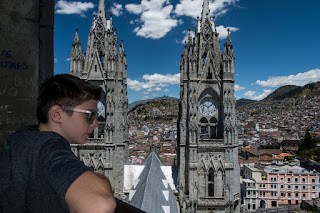 Evan wasn't too eager for the sightseeing in Quito until we climbed our way to the top of the Basillica and he got a look around.  Did I forget to mention that Quito is at 9,000 feet ASL?  It took some huffing and puffing, but we made it on our first full day in the city, and were amazed at the city which is spread all over hills and into valleys to accommodate its 2,000,000 residents.  And we hadn't even got near the Amazon and Galapagos which were our next stops.   Thanks, G!