MYSTERY - Just off the Road 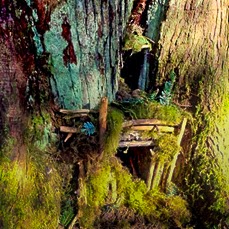 Hiking in the woods near Marymere Falls in the Olympic National Park, we were surprised to happen upon this mysterious little house built into the base of a giant tree.  There was no sign of where it came from, who built it, or who lived there.

Our grandson got on his knees and peeked inside, but could find no sign of life.  The story we invented was of a little family who came around only when there were no "normal-sized" humans to disturb them.

We live close to the area where vampires and werewolves roam, courtesy of The Twilight Saga series of books and films.  Consequently, we rather expect to find unusual beings or at least signs of them.  But this little home, too small for either Twilight species, is not threatening, nor is it explicable in human terms.  It simply exists in a little spot in the forest, beckoning passers-by to invent stories to fit inside its small rooms.

I've heard it said that imagination is necessary for life.  What a neat place we live in that encourages imagination to take wing!