GOLF IN WASHINGTON - Just off the Road 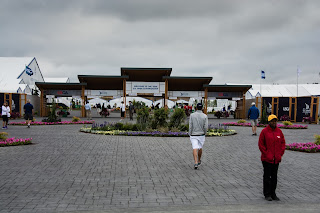 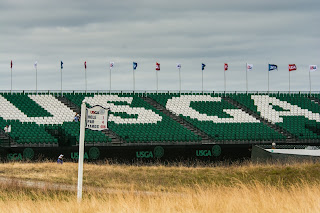 "It's the US OPEN and it's going to be in WASHINGTON!!!"  When I heard my spouse exclaiming at the top of his lungs sometime last winter, I had no idea that this event would become a family reunion of his 3 brothers, their families, and a bunch of golf bags and cameras.  The Chambers Bay course is located about 1 1/2 hours south of us, so we made plans to go and ordered our tickets early.

Not surprisingly as the event neared, our packing included not only his golf clubs but every camera, lens, filter, and other photography accoutrement in his possession.  Sadly, my shoulder is acting up right now, so when I took a practice swing in the backyard and ended up on my knees, clutching my arm, I decided that I'd be content to carry the tripod and extra camera for this trip.

There's another benefit to attending a PGA tournament.  Our nephew, John Wood, caddies for Hunter Mahan on the tour, and since the closest we normally get to him is seeing his arm on TV, this would be a chance to actually see him in person.  Happily, one of our brothers lives near Chambers Bay and he and his wife offered the use of their lovely home on a golf course, no less, so we had a place to stay and dine.  The rest of this story involves the acquisition of a 21' motor home, but that's for another time. 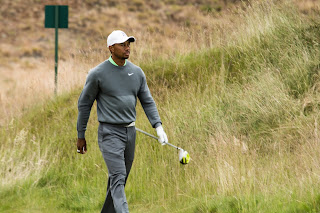 Our first day at the tournament was practice day, and since this was our first PGA event, we didn't know what to expect.  Turns out that practice is cool, since the players don't really care about a score, so they actually toss the ball to different locations to see how it runs, and do all sorts of other pro things.  Even Tiger Woods looked relaxed, and we had our first chance to chat with John - the nephew.  As we walked around the course, it was apparent that this would be no easy task for the players.  I'm no expert, but Chambers Bay looked like a killer to me - I won't be playing it anytime soon, even with two good arms. 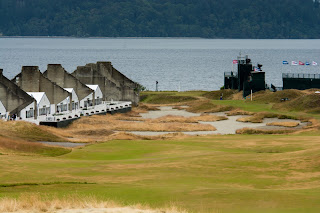 Friday's play was amazing - I'll never know how those guys actually get the ball from tee to green in par.  Of course, some of them didn't, but it was still pretty impressive, watching the beautiful swings and putts.  The best part, though, was the family reunion, and the time spent sharing something that the four brothers have in common.  They love this game!